Brewers storm back to take down Long Sox 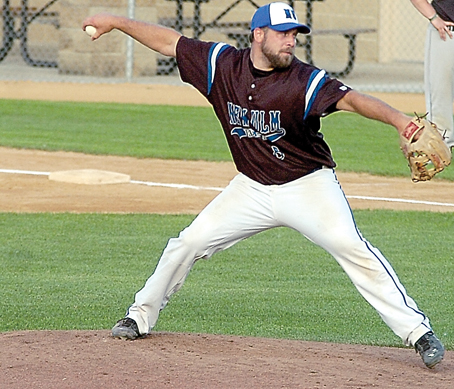 NEW ULM — In the top of the fifth inning, Lamberton scored six runs to erase a 2-1 New Ulm Brewers lead and take an at-that-time commanding 7-2 lead.

But the Brewers responded with four runs in the bottom of the inning and then added three more runs in the sixth and went on to a 12-8 win over the Long Sox Tuesday night in a Region 2C playoff game at Mueller Park.

Wade French got the win for the Brewers, who improved to 3-0 in Region 2C play.

Avery Stevens, a draftee from Essig, got the save as he recorded four strikeouts in two innings.

Hoffmann, Ranweiler, Judd Davis and Peter each had a triple.

Hoffmann and Peters each had two RBIs.

The Brewers play Wednesday night in Hanska with Lamberton in Sleepy Eye. Games have 7:30 p.m. starts.

“This win sets us up pretty good for region play,” Brewers manager Al Flor said. “This was a good team win for us — everybody contributed.”

New Ulm trailed 7-2 in the fifth inning when their offense got rolling.

In the sixth, an error, a Davis’ single, a walk and a Domeier base hit gave the Brewers an 8-7 lead, with a walk making it 9-7.

A Brody Peterson RBI single and a Hoffmann two-run single closed out the scoring.

“Our hitters have a lot of confidence — they just keep plugging away,” Flor said. “And Avery has been very tough for us. We did not draft him as a closer for us, but he has been awesome.”

Flor said that he will probably go pitching by committee Wednesday as the Brewers hope to go 4-0 in 2C play.