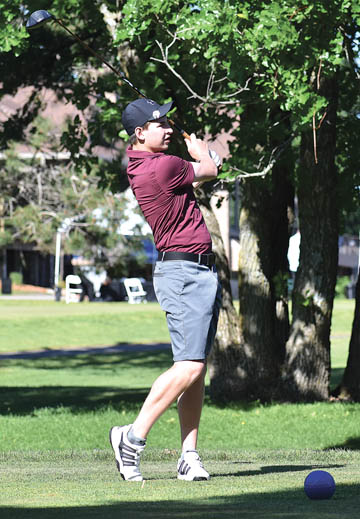 BECKER — Despite having a five-stroke lead heading into the second day of the Class A State Boys’ Golf Tournament, it wasn’t meant to be for Springfield.

Community Christian came back and defeated Springfield by three strokes for the state title.

The Tigers played well on both days, but it wasn’t enough to fend off the Eagles

Mavrick Winkelmann, a sophomore on the team, agreed with Kretsch.

“To get up there and have a five-shot lead going into Day 2, it’s disappointing to take second place, but second place is still a great accomplishment in my mind,” Winkelmann said.

Fertile-Beltrami and Lac qui Parle Valley finished tied for third overall with a team score of 676. Walker-Hackensack-Akeley-Laporte was fifth (692).

The Tigers were led by their solid one-two punch of Kretsch and Winkelmann. Kretsch had a two-day total of 155 to finish fourth and Winkelmann finished with a 157, tied for fifth.

Community Christian’s Brett Reid was the medalist with a score of 145. LPQV’s Harrison Patzer was second overall with a 149.

Sleepy Eye United’s Logan Netzke also had a big tournament, finishing tied for seventh with a 160. His teammate, Andrew Neid, was 26th overall with a 170.

Madelia’s Carson Wihlm finished his career 37th overall with a two-day score of 173.

Moving forward, the Tigers lose Rogotzke to graduation after this year, but everyone else is back to defend the Section 2A title next year. This year, the Tigers defeated Sleepy Eye United by one stroke to advance to state for the first time since 2011.

“Hopefully we’ll be back next year,” Kretsch said. “Our biggest competition is just getting to state in our minds, beating Sleepy Eye. Once we get there, we think our chances are good.”

On the girls’ side, New Ulm Cathedral’s Kayla Goblirsch made up for a tough first day in which she shot a 95 and turned in an 83 on Day 2 to finish with a two-day total of 178, good to tie her for 10th overall. She’ll be back next year for her sophomore season for the Greyhounds.