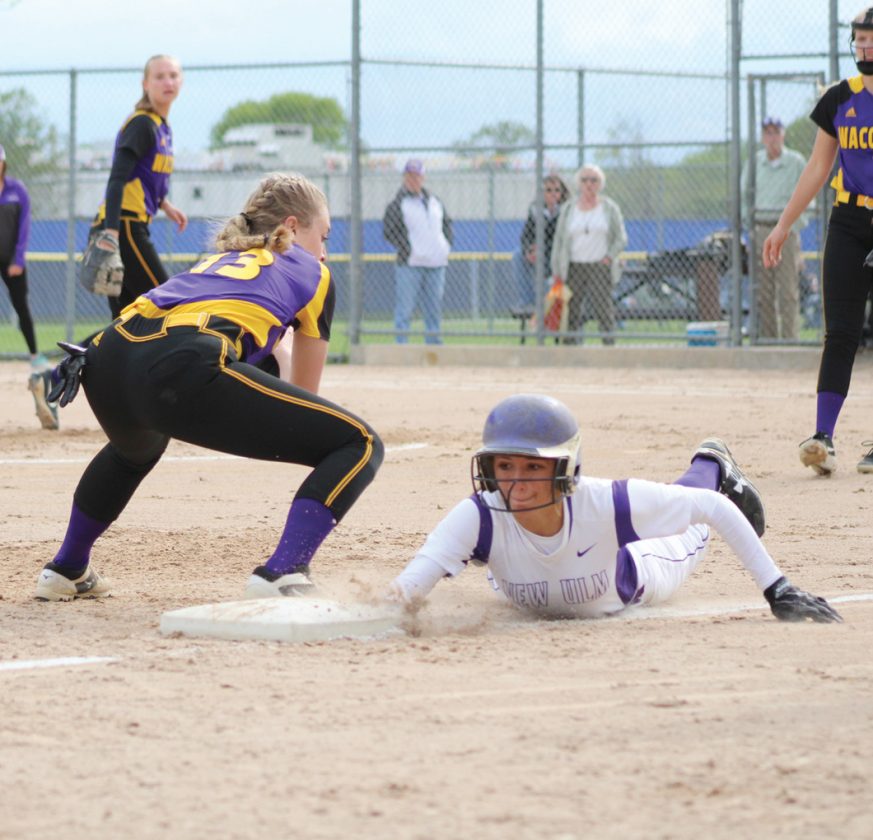 NORTH MANKATO — New Ulm’s Ashlyn Donner threw everything she had on Thursday at Caswell Park in Section 2AAA softball playoff action, striking out a career-high 18 batters in her first game and eight in the second game of the night for the Eagles.

The difference between the two games, however, came down to New Ulm’s offensive output.

After the No. 3-seeded Eagles picked up a dominant 10-1 win over No. 6-seeded Waconia in their first game of the evening, the Eagle bats were held quiet in a 1-0 loss to No. 2-seeded Faribault to finish the night.

New Ulm now drops to the elimination bracket to take on Worthington at 2 p.m. Saturday at Caswell Park on Field 6.

After clobbering Waconia for 10 hits, the Eagles were then forced to take on one of the top pitcher’s in the section in Faribault’s McKayla Armbruster.

Armbruster struck out 13 and allowed just one hit against the Eagles, a Joey Batt single in the third inning. Armbruster then showed off her bat in the bottom of the seventh, hitting a walk-off homer on Donner to send Faribault into the winner’s bracket Saturday.

It was a tough way to end the night for the Eagles, but Donner still allowed only two hits and the one run to the Falcons.

She was also playing again with bronchitis, something she picked up last week. To top it off, she also popped a rib out of place on Wednesday, prompting a call to the chiropractor just a day before Thursday’s big games.

Still, Donner was her usual self in the circle against Waconia, allowing two hits in the complete-game shutout to go with her career-best 18 strikeouts.

The Eagles had a scare against Faribault in the fifth inning when Donner made a diving catch after a popped-up bunt for the first out of the inning. Donner was slow to get up after reaggravating her rib injury but recovered enough to stay in, end the inning with a strikeout and finish the game.

Faribault didn’t get a hit off of Donner until the fifth inning.

In Game 1 of the day for the Eagles, Waconia struck first for a run in the top of the fourth after scoring on a throwing error from third. The Eagles then benefited on a few Waconia mishaps in the bottom half of the inning, scoring two runs, one on a dropped third strike and one on an error for a 2-1 lead.

The Eagles then broke things open in the fifth after Batt led off with a base hit. Carli Botten followed that hit with a single of her own while Noelle Forstner reached on an error after laying down a bunt to load the bases for Madeline Gag.

Batt ended up coming home on a wild pitch before Gag connected on a pitch for a three-run homer and a 6-1 New Ulm lead after five.

The Eagles scored four more runs in the sixth inning, led by a two-run single from Ellie Bute.

Batt was 2 for 3 with two runs scored and three stolen bases, while Forstner added a double and three runs scored.