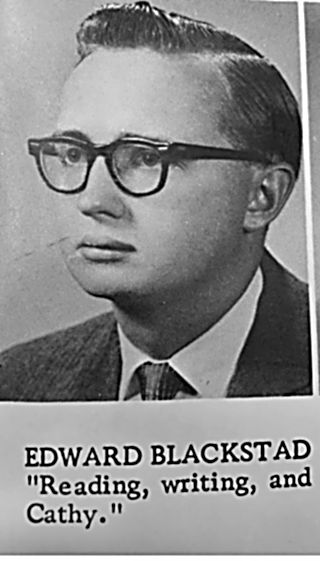 Ed Blackstad passed away on Jan. 15. Ed was a fellow Lion, patient, and good buddy. I had many great conversations with him through the years. We liked to review movies. In 1996, we did our best “Siskel & Ebert At the Movies” of “Mr. Holland’s Opus.” I asked him “What did you think?”

Ed replied “I loved it! Glenn Holland arrives in the school parking lot in the 1960’s driving an old Chevy Corvair. Just like the one I had!” I told Ed that I loved the movie, too, especially because it reminded me of him, to which he humbly blushed.

Back then, St. Mary’s students could “ride the bus down to Public” for shared-time classes. Hundreds more St. Mary’s kids signed up for Ed’s classes throughout his career. Ed retired from teaching in 1999 but stayed on as the school’s technology expert until 2006. He continued a computer repair business as a hobby in retirement.

Mr. Blackstad had a soft spoken and occasionally monotone delivery. Along with that came a dry sense of humor. He was extremely funny, the kind of teacher that you cannot forget. He was a kind teacher, human being, and family man.

Comparisons to Glenn Holland continue. I like to think that we all have “that” teacher or “that” coach who has impacted our lives. They turn that painful subject into a fun class and motivate us to learn. A great teacher can do just that, even if the subject can’t. Let’s face it. Physics, Trig, Chem, and Calc aren’t usually in most kids’ top ten favorite subjects list. They can also be the subject that “weed out” decisions on which career path one pursues. Mr. Blackstad could empower your drive to clear that subject hurdle and kick that subject in the “mass”.

One of the derivations of “opus” is from Latin meaning, “Work, effort, product of labor, work of art. Commonly referring to music.” Mr. Blackstad’s opus was one of technology and science.

My closest friends have been texting regarding Mr. Blackstad’s impact on their lives. My texting group didn’t assemble in the old high school auditorium to present Mr. Blackstad with his composed symphony like Mr. Holland received after his retirement. Instead, we met cell phone to cell phone honoring the man after his life.

This group of Ed’s former students represent careers in electrical and aerospace engineering, obstetrics and gynecology, dentistry, computer software developer, insurance agent, Delta aircraft lead mechanic, 28-year Air Force, retired full Colonels, and teachers. These best friends are scattered all around the world. All their careers were impacted by Mr. Blackstad, including my own just down the street from where Ed lived.

So, I present to you Mr. Blackstad’s Opus in their words: “I loved Mr. Blackstad. He was both kind and funny. He helped shape what intellectual curiosity is for many of us, and that will continue to live on despite his passing.” “I loved his classes. He definitely influenced my choice of career.” “Mr. Blackstad never understood the logic of golf. He said, ‘If you’re playing something that you enjoy, why would you practice to get better, only to play less?’ I think of that every time I play forty years later.”

“He gave me a D+ in his Physics class, and he said to me privately, ‘You earned the D; the plus is because you’re a great guy.” “I remember he made the whole class hold hands around the room. Two students held wires attached to a hand crank generator. He cranked it quickly and the students became a series circuit. We all felt the electricity. I have one like it in my class now.” “I will never forget shooting a pistol with wax bullets in his classroom to measure projectile velocity.”

“He did have a unique way of making you look at things. He helped me with college, because I didn’t just study for the test. I wanted to understand the ‘why’ behind things. I got that from him.” “He addressed us as Mister or Miss and treated us more like young men and women, kind of training us for that transition. He loved learning and did his best to help us learn.” “He never lost his cool when frustrated. He would rub both sides of his head, take a deep breath and admonish us in a voice of frustration.”

My brother Dave had Mr. Blackstad for physics in 1972-73, eight years before I had physics with him. Dave told me that Ed was one of his favorite teachers. Not surprising as Ed was the kind of teacher who transcended the generations and decades. Ed and Cathy came through my brother’s visitation line to console our family when Dave died in 2008. I will never forget that. Ed cared for his students after school, not just during.

Teachers do not get enough credit for all of the hard work, time, dedication and passion they inspire in changing lives. Our lives. Your children and grandchildren’s lives.

His son Peter asked him for advice before starting to lecture engineers in the corporate world, to which Ed replied simply, “Always remember, no one likes to feel stupid.”

Please share this column with the thousands of students Mr. Blackstad taught. And thank your favorite teacher for making learning fun, changing your life, and inspiring your passion or career.

Since Ed’s passing, I watched Mr. Holland’s Opus again. This time with tears in my eyes, as I was reminded of Mr. Blackstad throughout.

Here is my Siskel review of the movie’s Mr. Holland and the real-life Mr. Blackstad. Glenn Holland aspires to be a music composer and takes the job as a high school music teacher to “pay the bills” and changes lives. Ed Blackstad is recruited after getting his master’s degree from The Ohio State University to build top secret munitions for the government. This was during the buildup for the Vietnam War. After careful consideration he chooses to change lives…by teaching.

Richard Dreyfuss was nominated but did not win an Oscar for his portrayal of the fictional Glenn Holland. Mr. Edward M. Blackstad won more in life than any award sitting on a mantelpiece ever could.

I can picture Ed pulling out of the school parking lot right now in his Chevy Corvair. He, too, was a classic. Rest in peace Mr. Blackstad. Let the sweet music play.

Dean Brinkman is a chiropractor in Sleepy Eye.

Off the Record: The human face of the Holocaust

Note: In January 2004, Holocaust survivor Henry Oertelt of St. Paul visited New Ulm to tell the story of his ...

Common questions posed to local election officials about the presidential primary scheduled for March 3, 2020 are ...