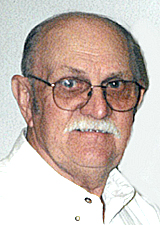 Visitation will be 4-7 p.m. Thursday and 8-10 a.m. Friday at the Minnesota Valley Funeral Home NORTH CHAPEL in New Ulm.

He was preceded in death by his parents; a daughter, Dianne Steinbach-Janni; his sisters, Margaret Richter and Delores Sellner; and by a brother, Raymond Steinbach.

Donald John Steinbach was born May 14, 1927 in New Ulm to Albert and Louise (Vogel) Steinbach; He was a graduate of New Um High School. Don served in the U.S. Army from 1945 to 1947 in Germany as a Staff Sargent in Counter Intelligence. He was employed by New Ulm Public Utilities Gas Department for over 35 years until his retirement.

Don was an avid hunter and fisherman. He spent many hours enjoying the Minnesota River over his lifetime. Known as the “Goosetown Woodcarver”, he loved carving and woodworking. He did many wood carvings for people in the community. Don enjoyed socializing with his nephews and many friends in town. He cherished spending time with his children and grandchildren. He was a generous, caring and giving man.