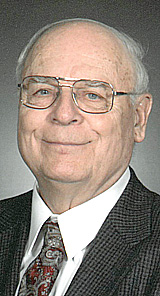 Mass of Christian Burial will be 11:00 a.m. on Saturday, July 13, 2019 at the St. John the Baptist Catholic Church in Searles. Burial will follow in the church cemetery.

To leave an online condolence for his family, or to sign the guestbook, go to: mvfh.org.

Charles Griebel was born July 26, 1925 in West Newton, Township to Oscar and Virginia (Palmer) Griebel. He graduated from New Ulm High School in 1942 and later attended the University of Minnesota. Charles was united in marriage to Jane Fesenmaier on November 15, 1950 at St. Mary’s Catholic Church in New Ulm. Charles and Jane were blessed with 6 children. Jane passed away on April 13, 1990. Charles later married Doris Haack on August 2, 1997 at St. Mary’s Catholic Church in New Ulm. Charles farmed for many years while working at Kraft for 27 years until his retirement in 1999. Charles was proud to serve as a County Commissioner for 16 years. He was an active parishioner of St. John the Baptist Catholic Church, Searles Softball, 4-H leader, along with membership in many other organizations including CAST, Habitat for Humanity, Farm City Hub Club, Brown County Fair Board, and Searles Senior Citizens. His life exemplified his passion to serve others; his family, his church, and his community.