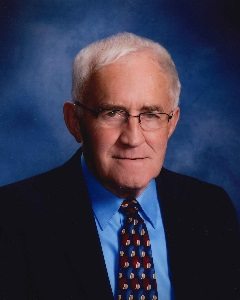 Memorial Services will be on Wednesday, October 18, 11 a.m. at Zion Evangelical Lutheran Church in Winthrop with interment in the Winthrop Cemetery. Military Honors by the Winthrop Honor Guard.

Visitation will be one hour prior to the service on Wednesday at the church.

Bob Trebelhorn was born June 20, 1942, in New Ulm. He graduated from Winthrop High School and the University of Minnesota. Bob joined the Marines and was in the reserves for ten years. Bob married Jane Okerlund on April 24, 1965. The couple was blessed with a son Scott, a daughter Betsy, and 52 years of marriage. Bob worked for Honeywell and Control Data in the heart of the computer revolution before moving back to Winthrop in 1972 to take over the family fuel business. Bob expanded the business and built a new store in New Ulm. He was active in the church and the Chamber. Bob had a profound love of country and his service to the Winthrop Honor Guard was particularly important to him.

The joy in Bob’s life didn’t come from his accomplishments, but from his quiet, humble ability to serve others and especially his family. Few people knew the depth and quantity of lives that Bob touched with his empathic ability to do just the right thing at just the right time for others in need. This was Bob’s Christian ministry here on earth. His example in faith, life, love, family, humility and complete selflessness will continue to inspire us to follow in his footsteps.

Bob’s only boasts involved his wife, children and grandchildren. Every basketball score or first job experience was a momentous event for Bob. His encouragement and excitement for all things big and small as they involved his family sustained him – especially in his later years.

Even in the face of a very long and challenging health struggle, Bob’s faith remained absolute to the very end. Bob’s only sadness came in his inability to continue to serve others as he had always done. Even in his diminished physical capacity, his faith, kindness and gentle acceptance of his circumstances continued to inspire up until his last breath. Blessed be his memory.